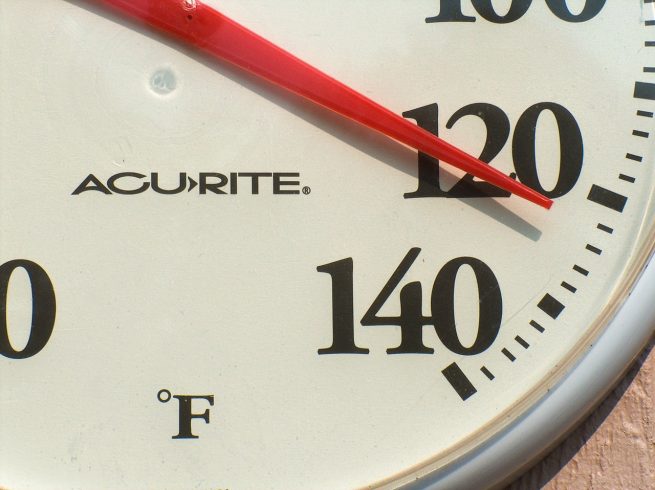 Not all these kids had “bad parents.” But all had parents who either underestimated how hot a car can get or simply forgot there was a backseat passenger and left a child behind.

Don’t Think It’s Hot? It Is Inside a Car

Thirty-eight Arizona kids died from heatstroke between 1990 and 2018.

Sadly, that number ticked up in late April 2019 when a Glendale father discovered his unresponsive 18-month old left inside a car parked at an apartment complex. The father quickly called 911, performed CPR, but it was too late.

The outside temperature was in the mid-80s, which we don’t consider to be all that hot here, but inside a closed-up car, it can get really bad, as this chart from AZFamily.com demonstrates:

Don’t count on shade to help. An Arizona State University study released last year looked at the temperatures inside different kinds of cars that moved around a parking lot, in and out of shade. The researchers found that when temperatures go above 100°, they continue to rise even in the shade, from 100° to 118° after an hour.

The temperature in a car left in the sun in 100° weather will rise to 157º within an hour.

Economy cars heat up more quickly than a sedan or minivan. And while ASU didn’t look at the impact of car color (the study used cars with similar colors) an older study from Berkeley Labs found that light-colored cars reflect up to 60% of the sun’s rays compared to black cars–which are also less fuel-efficient when the AC is on. California briefly considered banning sale of black cars. Interestingly, we were recently told that black and white are the most popular car colors in Arizona.

No One Should Be Left in a Hot Car

Several years ago, a local movie theater magnate was cited by police for leaving his dogs in a hot car on a summer day as he visited one of his theaters. He protested the citation as he dutifully checked on his dogs every 10 minutes or so and brought them water. He left the windows down, and had parked the car in the shade.

We bitterly recall he took up a handicapped space in a busy Scottsdale shopping center although neither the vehicle or any occupants were disabled.

Kudos to the Scottsdale police, who weren’t persuaded. He was cited for endangering his pets and for parking in a handicapped space without a permit.

Get an App to Remind You to Check Your Car

There are phone apps that remind parents and caregivers (and pet owners) to check their cars before leaving them to avoid forgetting who’s buckled in the back seat. One of them was developed by a Phoenix father after hearing about a Nashville father whose one-year-old died after being left in the back of a hot truck. You can read more about Erin J. O’Connor’s BackSeat App here, and check out others as well in the Google PlayStore and AppStore.

Here are a few other pointers:

If you travel with kids or pets, use an app tool and these tips to remember the backseat passengers.

And if you’re going somewhere where they aren’t permitted or are discouraged, leave them home with an appropriate sitter or send someone else on that errand.